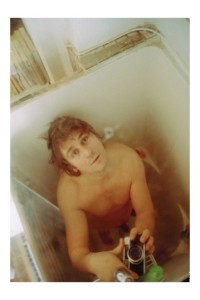 Corrado Sassi was born in Rome in 1965. From an early age with the photo camera donated by his grandfather, he photographs and prints in the dark room his photographs and projects. He graduated from a Language-oriented High School and later attended the Academy of Fine Arts in Venice, where his art path begins, in the field of photography.

In 1994 he attended the ICP, International Center of Photography in New York City, where he received the diploma in Photojournalism.

In the first years of the ’90s he auto-finances his artistic research in the field of photography, working as an actor in film and in the world of advertising.

Around 1996, dwelling in Venice for two years, he begins to build the form of “Snap”, a kind of project of Street Photography realized also in numerous trips undertaken abroad.

When he returned to Rome he began to participate in his personal and collective exhibitions in Italy and abroad. Beginning in 2000, his personal research is focused, in addition to photography, also on installations , performances, painting and drawing on paper.

In the same time, another project, “Reflections” (Artviewers), is cultivated in the course of time, documenting the contemporary national and international scene, photographing the audience of exhibitions of art .

In 2012 he makes the his debut in directing with “Waves”, an independent feature selected in competition for the section Perspectives in Italy for the International Rome Film Festival and awarded at the World Fest-Houston in 2013 as best first feature and the latest edition of Maremetraggio with a prize from the public.

From 2015, he introduces in his artworks the embroidery reflections of existential character, photographs of large and medium-size printed on PVC that depict skyscrapers located in Europe, the United States and China.

His works have been presented in different occasions: famous are the “boules de neige” made at Villa Medici for the exhibition “Tutto Normale [All Normal]” and numerous exhibitions of photography, including a collective show at the Museum SMAK in Ghent. His works are found in many collections public and private, such as the Galleria Nazionale d’Arte Moderna in Rome and the collection Bulgari.